Every sound has an internal structure that determines its tone quality or timbre. When the larger structure of the music (the musical scale) reflects this internal structure, then the timbre and the tuning are related in a fundamental way.

Music made with such related timbres and tunings is called xentonal. You can find out more about how this works by clicking here, or you can check out my book Tuning Timbre Spectrum Scale. My newest CD, Exomusicology is also available. 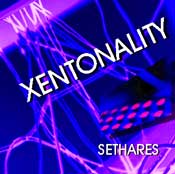 XENTONALITY contains the following musical pieces, several of which are available for download in mp3 format - just follow the links...

Ten Fingers 3:13
Demonstrates the kind of consonance effects achievable in 10-tet. The guitar-like 10-tet timbre is created by "mapping the spectrum" of a sampled guitar to make it compatible with 10-tet. The full title of this piece is If God Had Intended Us To Play In Ten Tones Per Octave, Then He Would Have Given Us Ten Fingers. Download a mp3 version of Ten FIngers.
Circle of Thirds 3:36
There is an interesting and beautiful chord pattern in 10-tet that is analogous to (but very different from) the traditional circle of fifths. This piece cycles around the circle of thirds over and over: first fast, then slow, and then fast again. Download a mp3 version of Circle of Thirds.
Three Ears 4:19
As each new note sounds, its pitch (and that of all currently sounding notes) is adjusted microtonally (based on its spectrum) to maximize consonance. The adaptation causes interesting glides and microtonal pitch adjustments in a perceptually sensible fashion. Download a mp3 version of Three Ears.
Seventeen Strings 3:35
A sampled Celtic harp is transformed for compatibility with 17-tet.
Unlucky Flutes 3:49
Flutes, guitars, bass, and keyboards are spectrally mapped into 13-tet. All instruments clearly retain their tonal identity, yet sound harmonious even on sustained passages. Compare to the 13-tet demonstration on Carlos' Secrets of Synthesis (track 16), which is introduced, "But the worst way to tune is probably this temperament of 13 equal steps."
Glass Lake 3:03
Instruments which are spectrally mapped "too far" can lose their tonal integrity. When guitars, basses and flutes are transformed into the partial structure of a drum (a tom tom), they are almost unrecognizable. But this does not mean that they are useless. The "tom tom" scale supports perceptible "chords," though the chords are not necessarily composed of familiar intervals. Tom Staley played a key role in writing and performing Glass Lake.
Duet for Morphine and Cymbal 3:16
Each angle in an x-ray diffraction pattern can be mapped to an audible frequency, transforming a crystalline structure into sound. In this piece, complex clusters of tones derived from morphine crystal resonances are juxtaposed over a rhythmic bed supplied by the more percussive timbre of the cymbal. The mapping technique was introduced by Tom Staley and myself in "Sound of Crystals," which appeared in the September 1992 issue of Experimental Musical Instruments. Download a mp3 version of the Duet for Morphine and Crystal.
Tingshaw 3:58
The tingshaw is a small handbell with a bright and cheerful ring, and it is played in a scale determined by the spectrum of the bell itself. Tingshaw is discussed extensively in Tuning Timbre Spectrum Scale as an example of how to take the spectrum of an existing sound, find the related scale, and build a playable instrument. This ting tolls for us!
Incidence and Coincidence 5:23
What happens when you play simultaneously in different tunings? Each note in this 19-tet melody is "harmonized" by a note from 12-tet, resulting in some unusual nonharmonic sound textures. The distinction between ``timbre" and ``harmony" becomes confused, although the piece is by no means confusing. Download a mp3 version of Incidence and Coincindence.
Haroun in 88 3:36
In all 12-tet instruments (like the piano), there are 100 cents between adjacent steps. Haroun in 88 uses a tuning in which there are 88 cents between adjacent steps, a scale first explored by Gary Morrison. One feature of this scale is that it does not repeat at the octave - instead, it has 14 equal steps in a stretched "pseudo-octave" of 1232 cents. One way to exploit such "strange" tunings is to carefully match the tonal qualities of the sounds to the particular scale.
88 Vibes 3:47
Also in the 88 cent tuning, 88 Vibes features a spectrally mapped "vibraphone."
October 21st 1:38
There are no real octaves (defined as a frequency ratio of 2 to 1) anywhere in this piece. The sounds in October 21st are constructed so that the octave between f and 2f is dissonant, while the nonoctave between f and 2.1f is consonant. Thus the unit of repetition is a ``stretched pseudo-octave" with a frequency ratio of 2.1 to 1. Since the structure of the timbres are matched to the structure of the scale, these nonoctave intervals can be consonant, even as the (real) octave is dissonant.
Saint Vitas Dance 3:27
Begin with a MIDI drum pattern. Use the pattern to trigger a sampled guitar sound - it is wildly dissonant since the pitches are essentially random. At each time instant, perturb the pitches of all currently sounding notes to the nearest intervals that maximize consonance. Thus is born an adaptively tuned dance.
Truth on a Bus 3:20
A 19-tet guitar piece that is unabashedly diatonic. If you weren't listening carefully, you might imagine that this was a real guitar, tuned normally, and played skillfully. You would be very wrong. Download a mp3 version of Truth on a Bus.
Imaginary Horses 3:53
This sequence contains the harmonic spectra of a piano and a "perc flute" which are matched to the simple integer ratios 1/1 6/5 4/3 3/2 8/5 9/5 2/1 to form a Just Intonation scale designed by Lou Harrison. The consequence is a piano and synth duet with galloping piano riff and bucking synth lines. Download a mp3 version of Imaginary Horses.
The Turquoise Dabo Girl 4:10
Many of the kinds of effects normally associated with (harmonic) tonal music can occur, even in such strange settings as 11-tet (which is often considered among the hardest tunings in which to play tonal music). Consider, for instance, the harmonization of the 11-tet pan flute melody that occurs in the `chorus'. Does this have the feeling of some kind of (perhaps unfamiliar) 'cadence' as the melody resolves back to its 'tonic'? Spectral mapping of the instrumental sounds allows such xentonal motion. Download a mp3 version of The Turquoise Dabo Girl.

All the mp3s are summarized here.